Graphic Medicine in a Pandemic

Graphic Medicine in a Pandemic is a workshop offered by RIT's Center for Engaged Storycraft.  In this workshop, they use the comics-making to process and communication their experiences of the life-changing COVID-19 pandemic. Inspired by contemporary and historical art and comics about health and disease, they investiage elements of epidemiology that resonate with our personal knowledge, beliefs, and observations of COVID-19's impact on our lives.  Through drawing, writing, reflection, and critque, they practice methods of graphic narrative-making that contextualize and communicate the world's transition to a "new normal." Offered for the first time in Fall 2020, this workshop will be offered again in October 2021.

Featured on this page are three examples of student's work where they used a cartoon by John Scott Clubb or Elmer Messner and created their own cartoon in response. 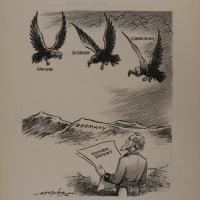 Original cartoon by John Scott Clubb, "Hovering Over," from 1947. 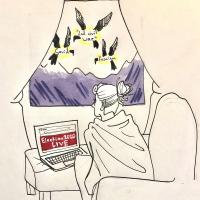 Cartoon in response to Clubb's by Holly Morgan.

What attracted me to this comic was the simplicity of it, and the clarity of the hovering, looming vultures. They immediately set the tone, that something is already 'dying' on its own before they even land and tear it apart further. Also including a seemingly impartial observer only makes it worse, seeing as our sort of audience conduit can't, or just isn't, moving to help. From the perspective of someone responding to it as well, it gives a very easy play of America in the iconic form of Uncle Sam observing Germany from the outside, and someone like me seeing the same signs from the inside. Physically, in terms of social distancing, but also having to be here in the US during the pandemic/election/mess. 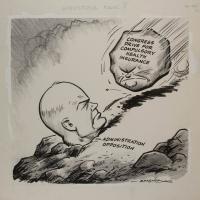 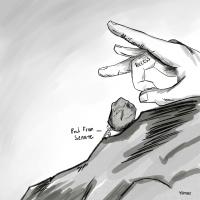 Cartoon in response to Messner's by Yilmaz

I chose "Irresistible" because it almost perfectly reflects the situation certain people are facing in the fight for better public healthcare and social programs that are being impeded by politicians. Especially in this excerpt from the official Social Security website's timeline:

1960: Arthur S. Flemming, in testimony before the Ways and Means Committee, stated: "I want to make it clear that as an Administration, we will oppose any program of compulsory health insurance.

This quote reflects McConnell's unwillingness to pass bills and stimulus checks that would benefit Americans that cannot afford basic healthcare that are also on the verge of losing their coverage due to "pre-existing conditions" like COVID. 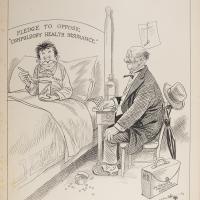 Original cartoon by John Scott Clubb, "Making Him Stick to His Bed Will Be Doc's Big Job Now," from 1919. 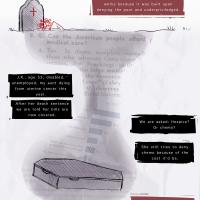 Cartoon in response to Clubb's by Sara Calhoun.

This comic, “Making Him Stick to His Bed Will Be Doc’s Big Job Now,” by John Scott Clubb in 1919 got my attention because of its simplicity and anchoring message that can be tied to the reality of today’s health care system. While quite visually pleasing in shading and form, there are thematic details throughout the comic, that for me, hint as to why our medical system operates the way it does today. For example, the fact that the “re-election” tonic is only granted to the ticket by the doctor upon opposing compulsory (or universal) health insurance indicates the doctor’s opposition to government mandated insurance/hospitals since that would interfere with his own pay and patient list. Anti-government thought processes like this have led to a greater increase in modern day private medicine practices that divide the healthcare system into those who can and those cannot afford the right to live. These themes of money over wellbeing are depicted in the comic through the pills scattered about the floor rather than neatly given to the patient. While in 1919, people did not experience the healthcare system, inflation or wage rate the same way as in 2020, this comic demonstrates the seeds planted in the political climate that have led to the repercussions of today. 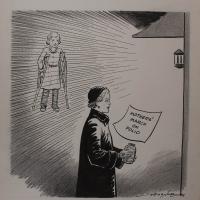 Original cartoon by Elmer Messner, "Voice From the Background: Thanks!," from January 28, 1953. 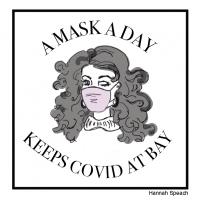 Cartoon in response to Messner's and Democrat & Chronicle cartoons 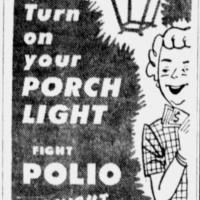 On January 28, 1953 the Democrat and Chronicle had a comic on page 5 that stood out to me. The illustration consists of a woman standing under a porch light holding cash and smiling. It reads, “Turn on your porch light, fight polio tonight.” According to the D&C, women from Rochester canvassed houses on their “Mothers March on Polio Day,” during this evening. They went from door to door (if the porch lamp was on) to collect contributions for patients with polio, as well as for further research on the uncured disease. The comic is appealing to me because of the warm and welcoming nature the lamp and the woman portray to the viewer. Especially since there were no cell-phones or email during that time, this seemed a much more personable way to communicate with the community and work together to fight the disease