Brief History of the Editorial Cartoon

This historical sketch of the editorial cartoon considers terminology; evolving technology; the risks, rewards, and restrictions in news media; and the reach and role of the art form today.

Whatever the label or medium, satire questions motives, skewers hubris, and invites others to do the same.

In art history, the word cartoon is a noun or verb tracing to the Renaissance, deriving from the Italian word la carta for paper or map. An artist made a full-scale preparatory sketch, or cartoon, for any medium: sculpture, tapestry, mosaic, stained glass work, or painting. Michelangelo made cartoons before painting the Sistine Chapel ceiling in Rome.

The Oxford English Dictionary (1971) records a reference to the noun in 1863 as “a paper comic of current events,” and as a verb in 1887,” to caricature or to hold up to ridicule.”

In modern journalism, the editor of the Columbia Encyclopedia, Paul Lagasse, defines a cartoon as “a single humorous or satirical drawing, employing distortion for emphasis, often accompanied by a caption.” The editorial – or political – cartoon relies on caricature, stock characters, and cultural symbols to become a “propaganda weapon with social implications” (p.486) — a tool to influence public opinion.  The measure of a cartoon’s success is the force of its idea, rendered clearly and resonating beyond its subject of the moment. The artistry is secondary to the message, which should lay bare behavior and character (Press, p.19).  In the 18th century, Johnathan Swift wrote advice in a poem to fellow-satirist William Hogarth, “Draw them so that we may trace/All the soul in every face” (Hess, p.16).

Artists were always free to draw their own ideas on hand-printed single sheet cartoons. They were independent and could reach a limited and random audience, yet their offended victims could easily destroy single sheets. The 15th century brought a pivotal change: the Gutenberg printing press in Mainz, Germany facilitated printing large volumes of news sheets and images, instead of one painstaking original. The resulting term, the press, became an agent of mass communication and signaled danger to those in power.

In Renaissance times, the press produced so-called broadsheets for wide distribution, conveying news and commentary through metaphor and caricature (Danjoux, 2007), accessible even to illiterate audiences. Political cartoons had the power to incite revolution. Radical ideas could transcend borders and compel the masses to challenge religious authorities – like the 16th century German Reformation breaking from the Catholic Church – and political rule – like the 18th century American colonies revolting against the English King George III. By the 19th century, broadsheets evolved to newspapers circulating throughout Europe and the US (Ibid.).

In early 19th century France, the lithographer Honore Daumier was an ardent champion for the oppressed peasant class. Publishing his editorial cartoons in numerous publications, Daumier repeatedly lambasted King Louis-Phillippe for exploiting laborers. His cartoons portrayed the King as a bloated pear, and a grotesque giant “Gargantua,” feeding off the toil of his people. The king first fined, then imprisoned the artist, and finally banned political cartoons altogether (Cronin, 2008).

An independent artist was vulnerable financially and politically, but a publication could provide more security. By the mid-19th century in America, newspapers regularly featured editorial cartoons to engage readers and influence public opinion. Major political newspapers featured cartoons expressing publisher’s views. As artists welcomed a steady paycheck, they also sacrificed independence and deferred to the editors’ direction. Consequently, artists shared the risk of reprisal yet broadened their reach through editors and publications.

Around the Civil War, Harper’s Weekly hired political illustrator Thomas Nast, who is sometimes called the "Father of the American Cartoon." Nast pitched a campaign via cartoon to expose William M. “Boss” Tweed, and his corrupt Democratic New York City political machine known as Tammany Hall. Nast’s drawings rendered the Boss’ portly figure, tweedy suit, and signature diamond stickpin, with a sack of money in place of his head. Tweed’s giant figure towered over police who couldn’t touch him. The public was blasé, trusting the government to manage crime.

Tweed, who routinely bribed officials to indulge his crimes, recognized Nast posed a threat: “Stop Them Damn Pictures. I don’t care so much what the papers write about me. My constituents can’t read. But, damn it, they can see pictures.”

Boss Tweed’s henchmen tried to bribe Nast – offering him $100,000 to study art in Europe – but Nast continued his attach until his cartoons incited the public to vote Tweed’s cronies out of power.  Tween died in prison in 1878 (Hess, p.13).

On a darker level, editorial cartoonists’ barbs can imperil the publication and human life. The Paris-based satirical magazine Charlie Hebdo has published cartoons mocking celebrities and religions of all kinds, including the Muslim Prophet Muhammad. Those cartoons prompted protests from Muslims around the world — and ultimately violent retaliation.

In 2011, the office was firebombed. Then, in early January 2015, terrorists stormed the office firing automatic assault rifles, killing 12 people, including the editor and two police officers. The assailants shouted, "Allahu Akbar!" God is most great, a Muslim declaration of faith. 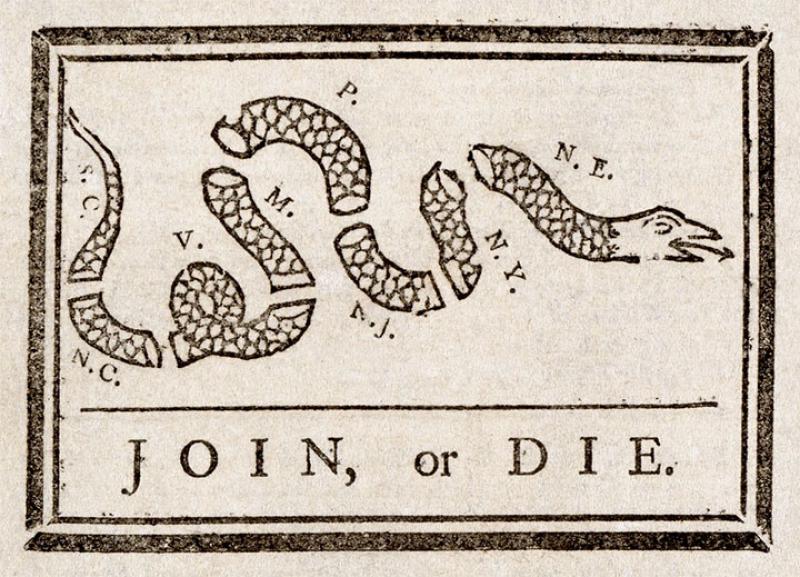 Tools of the trade: characters and symbols

Artists not only drew actual people, but also created stock characters and relied on symbols to convey their message. Benjamin Franklin created the first American newspaper cartoon in 1754, entitled “Join, or Die,” depicting the eight colonies as a snake divided in eight pieces. The snake image reappears in every conflict through the Revolutionary War. The Virginia Colony’s Culpepper Minutemen also employed a snake as an emblem of unity, “Liberty or Death. Don’t tread on me” (Press, p. 209).

A century later in the 1870s, Thomas Nast popularized the US political symbols of Democratic donkey and Republican elephant (Stamp, 2012). America has been portrayed as a native-American Indian, an eagle (Press, p.212), leggy Uncle Sam, or stalwart Lady Liberty; England as a lion (Press, p. 210), or a jovial character named John Bull (Press, p.214); the Red Cross has been personified as a goddess-like nurturing woman; the New Year as an infant.

The Pulitzer Prize, established in 1917, first awarded a prize for current efforts for Editorial Cartoons in 1922, to Rollin Kirby of New York World (Press, p.196).

The 19th and early 20th century was a golden age of newspapers, before they faced competition from new media like radio and television (Clune, p.241). Multiple papers favored different political parties. The press offered partisan, editorial commentary through word and illustration by paid staff.

As papers grew – through takeovers like Frank Gannett’s emerging empire in New York – so did their readership broaden, shifting the media’s mission to objective news reporting, with less editorializing and more entertainment. To avoid offending a widening, multi-cultural audience, publications grew more commercial, so as to sell the news rather than comment on it (Danjoux, 2007).

In the 1930s, syndication allowed editorial cartoonists to broaden their range again. A publication, an independent writer, or artist could sell work to other publications.

By the 1990s, the digital age opened a new frontier to the media, to quickly and cheaply reach a limitless audience.  Editorial cartoonists stepped away from the editor's edict. Through the World Wide Web, artists reclaimed their independent voice and emerged as global freelancers.

Today, amidst a plethora of views and voices on the Web, some besieged leaders dismiss an inconvenient challenge as fake news. Yet, whatever the platform and perils, editorial cartoons have the power to deflate hubris, uncover deceit, incite revolution, dethrone a bully. Whether addressing epidemics, economics, or elections, editorial cartoons surmount language and cultural barriers to speak truth to power.

As history repeats and patterns emerge, two maxims fortify the independent voice: The pen is mightier that the sword, and, a picture is worth a thousand words.