Editorial cartoons provide a window into history by showing us what people were thinking and talking about at a given time and place. Political cartoonists have to interpret events as they are happening, without the benefit of hindsight or the time for in-depth research. Clubb and Messner, employed as editorial cartoonists for Rochester-area daily newspapers spanning the years 1900-1965, combined their outstanding artistic talents with an ability to comment on an event or situation in a vivid, perceptive and imaginative way. In this section of our exhibit, we learn about the economic climate in the United States and in the Rochester area through this series of drawings. Clubb and Messner were employed during some of the most difficult economic times in our country: World War I, the Great Depression, and World War II. 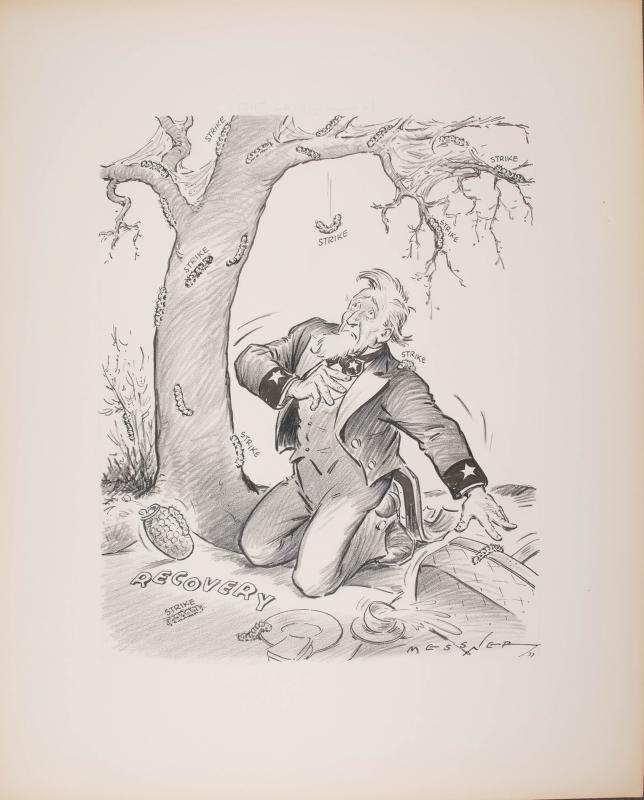 President Franklin D. Roosevelt and his New Deal programs had the US on the road to economic recovery from the Great Depression until opposition to his plans began building in 1937, causing the recession of 1937-38, sometimes called “the recession within the Depression.” By spring of 1937 production, profits, and wages had regained their early 1929 levels, yet unemployment remained high. The American economy took a sharp downturn in mid-1937, lasting for 13 months through most of 1938.

In 1937 there were 4,740 strikes across the country – the highest number to that point in recorded history – with the greatest number of strikes occurring in New York State according to the Bureau of Labor Statistics. Why? The National Labor Relations Act of 1935 (or the Wagner Act) gave private sector employees the right to organize into unions and engage in collection action, such as strikes. Unions had been forming to fight against the unfair labor practices large corporations had been using to exploit their workforces, especially during the economic downturn when workers were afraid of losing their jobs and being easily replaced. Demands for a minimum wage, child labor laws, maximum hours and the end to poor working conditions were some of the issues workers faced that led to strikes in major industries attempting to organize. Iron and steelworkers, machinery and auto workers, textile and clothing workers, women workers at Woolworth’s Detroit store and other retail stores, building and construction and the lumber industry were some of the top industries affected that year. These were considered some of the most important strikes in American history, leading to a higher standard of living for working Americans. 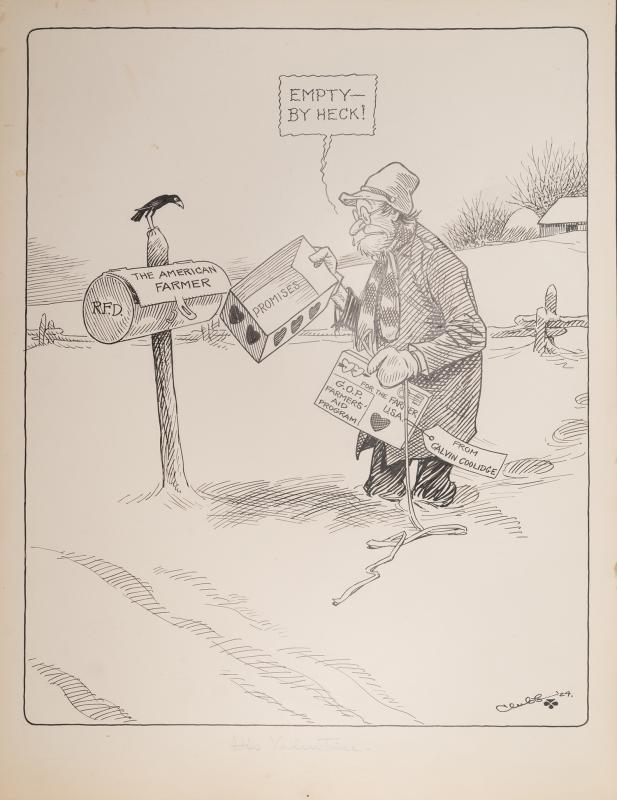 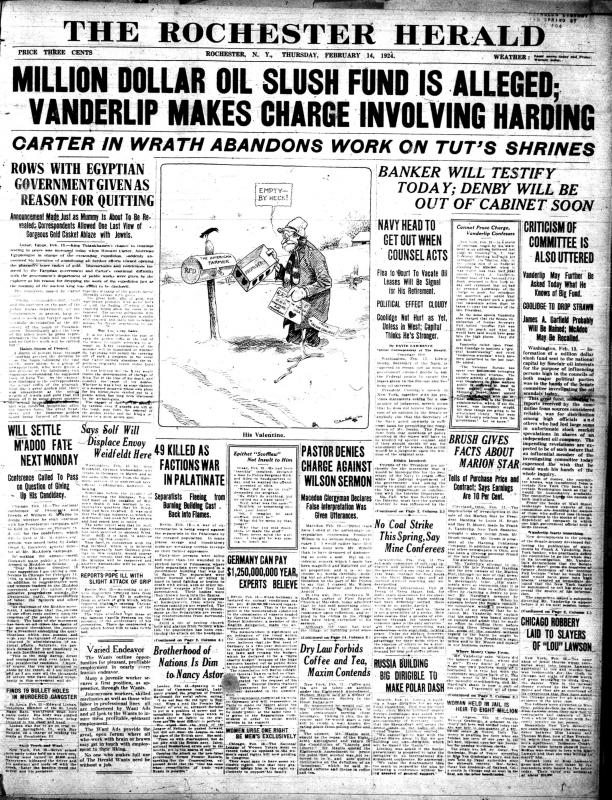 "His Valentine" as it appeared on the frontpage of The Rochester Herald on February 14, 1924.

The depression of 1920-1921, which was a severe economic crisis with double-digit unemployment and a business downturn, was short lived because of the policies initiated by President Warren G. Harding. President Harding and, later, President Calvin Coolidge, turned a severe depression into a historic economic recovery by reducing spending, cutting tax rates, and paying down the national debt, but “even as the rest of America enjoyed a boom during the 1920s a depression gripped rural America”.

In response to the agricultural depression of the 1920s, the farm block in Congress turned to what became known as McNary-Haugen, a plan whereby farmers would sell their surpluses to the government, which would then market them abroad. The principal farm-aid plan was to establish a Federal Farm Board to purchase certain commodities at prices equivalent to those of the prosperous pre-war period, and to “dump” the surplus in foreign markets.The policy objective of McNary-Haugen was to elevate commodity prices and restore prosperity to agriculture by ending the surplus, while providing “a minimum price” for their crops.

President Coolidge would veto the McNary-Haugen bill each time it reached his desk. “Coolidge believed that raising agricultural prices would encourage farmers to increase their production, which would require more subsidies, and the process would be repeated. Coolidge also described the consequence of the equalization fee as “a most dangerous nullification of one of the essential checks and balances which lie at the very foundation of our Government…” Coolidge argued that this would “certainly involve an extraordinary relinquishment of the taxing power on the part of Congress…” Another reason why Coolidge opposed McNary-Haugen was that it depended on the actions of foreign governments, which went against the America-first policy tendencies of the Administration.

Other Economics Cartoons from the Collections 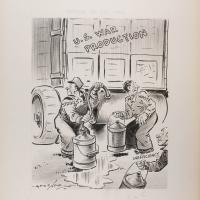 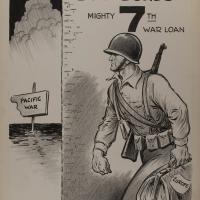 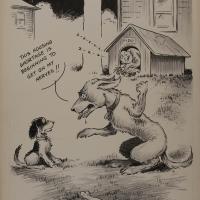 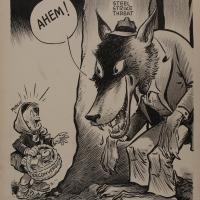 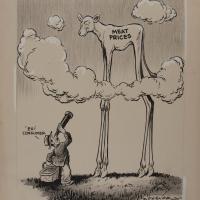 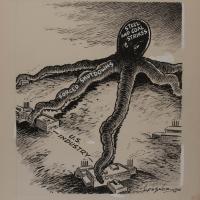 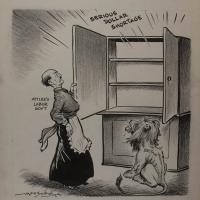 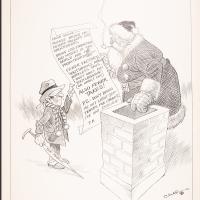 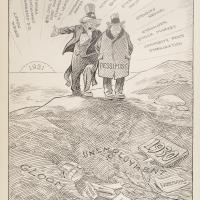 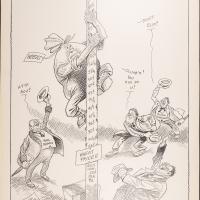 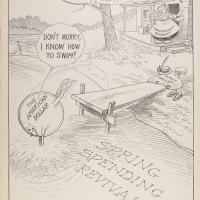 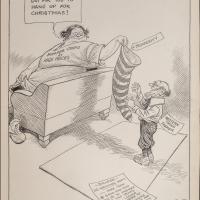 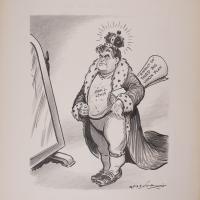 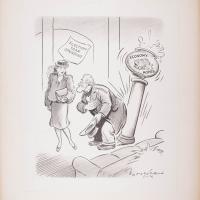 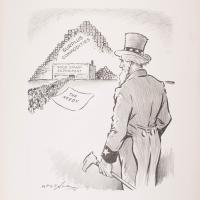 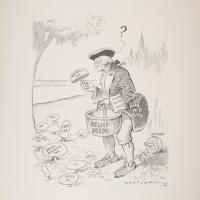 Elmer Messner, "Hard to Tell the Mushrooms From Toadstools," 1934.