Clubb and Messner worked as editorial cartoonists for Rochester’s flagship paper, the Rochester Times-Union, during the first half of the 20th century – a time when the City was dominated by powerful Republicans in a conservative culture where big business was the big news. Yet, a look at Rochester’s evolution over the century before and during their careers reveals rapid change through the convergence of immigration, social reform, and innovation. Patterns emerged that we recognize today, where epidemics, economics, and elections reveal that history repeats.

By the 1890s, Rochester was a city of many industries, whose proud slogan, “The best governed city” (Clune, p109) belied extreme contrasts. Successful milling merchants had first built mansions on Corn Hill in southwest Rochester, and other industrialists followed, forming a snug, insular society inside the Third Ward, also known as the Ruffled Shirt District. Just across the canal (now I-490) on Exchange Street, a racy district called Murderers’ Row trafficked in prostitution and liquor (Clune, p. 59). In the 1890s, the City registered some 560 saloons (McKelvey, p.87). In northeast Rochester, large groups of immigrants from Poland, Italy, and the Balkans joined existing Irish enclaves and some 17,000 Germans, adding up to a quarter of Rochester’s population (McKelvey, p.86).

In response to disease, poverty, and an 1880-90s depression, civic and philanthropic groups emerged, along with advocates for education and social reform. Labor unions organized to address sweatshop and child labor conditions. Rochester gradually addressed the dark side of urban growth.

This is Rochester’s climate of dynamic contrast where Clubb and Messner sought to ply their trade as editorial cartoonists. 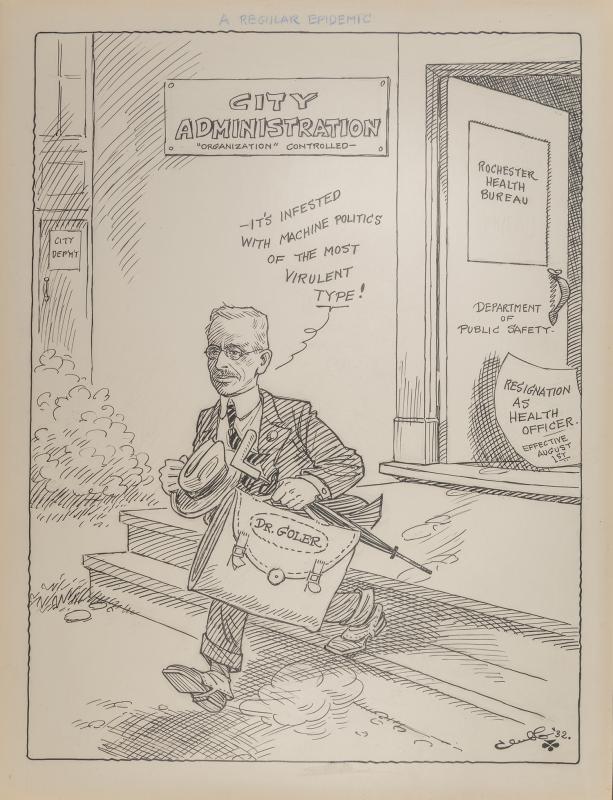 The Erie Canal carried goods and passengers – and sometimes disease as well. Like today’s COVID-19 pandemic, 19th century health crises, including the 1830s and 1850s Cholera epidemics, revealed economic disparities by spreading fastest through the most vulnerable populations living and working in close quarters, like immigrants in clothing factories (McKelvey, p. 58).

Journalist Henry Clune writes that Rochester winters would bring a ritual of colored cloths decorating doors wherever homes suffered a health crisis. Instead of a wreath, a cloth would signal a health hazard warning visitors away. The Health Bureau directed a color code for the cloth: “Red for scarlet fever, blue for diphtheria, pink for measles”. Then, even more desperate, came tuberculosis and small pox (Clune, p. 117).

In 1902, Small Pox ravaged Rochester, especially among the indigent, who were housed in Hope Hospital – nicknamed “the pest house” – next to Mt Hope Cemetery.  Henry Clune writes that large white tents – eerily reminiscent of the merry tents at Rochester’s Lilac Festival – were erected to house the multitude likely headed to mass graves. Rochester’s parsimonious politicians and apathetic public ignored Dr. Goler’s petitions to vaccinate, under the illusion that the new, enlightened century had brought an end to scourges like war and the Black Plague. Underfunded and overwhelmed, Dr. Goler’s team was ”like soldiers with halberds assaulting a machine-gun nest” (Clune, p. 119).

After two years, Rochester emerged from the crisis with selective memory. Dr. Goler was first blamed for the crisis and then for the crushing loss of life, but was ultimately recognized widely as “one of the most independent, enlightened, and advanced public health officers in the nation (Ibid.).

As WWI ended, Rochester’s four daily papers supported President Woodrow Wilson’s proposed League of Nations. Yet, by 1920 priorities had shifted. Rochester and the country elected the conservative Warren G. Harding in a landslide. Harding rejected the League of Nations and promised a nostalgic return to normal at home (McKelvey, p. 116). As the troops returned, Rochester and the country turned from peace negotiations and international alliances to a raging epidemic on the home front. The 1918 influenza which had ravaged troops in trench warfare now overran the health facilities at home. Like the COVID-19 pandemic today, the 1918 flu epidemic stole lives and caused a shortage of goods and services, bringing business to a standstill.

Meanwhile, Rochester social reformers raised their voices to level the playing field for all citizens. Two of them published their own newspapers and campaigned their entire lives.

Susan B. Anthony (1820-1906) acted on her Quaker upbringing, advocating for all citizens to earn a living, exercise free will, and vote in elections. Anthony advanced each movement that she embraced: first temperance, viewed as the chief cause of poverty; then abolition; and finally women’s suffrage. She influenced the University of Rochester to admit women in 1900. She and Elizabeth Cady Stanton published a weekly newspaper promoting women’s rights, The Revolution, from 1868 to 1872. Today, Anthony’s Rochester home is the site of a national museum devoted to her work.

Frederick Douglass (c. 1818-1895) was Anthony’s peer, friend, and fellow reformer as abolitionist, orator, editor, and diplomat. He escaped slavery in Maryland, taught himself to read, and called Rochester home from 1847 to1872. His home was a stop on the Underground Railroad. He founded and published the anti-slavery newspaper The North Star in downtown Rochester. Douglass became the most photographed man in the country – moreso even than the President – demonstrating in speech and comportment a black person’s success in his time.

In 1899, when Rochester opened the New York Central Railroad Station downtown, it unveiled the first US monument dedicated to a black citizen: an 8-foot-tall bronze statue of Douglass in his favorite stance – mid-speech, mid-step, hands out, greeting every visitor to the city. Today, Rochester’s airport bears his name.

These firebrands contributed mightily to ratifying the following Amendments to the US Constitution:

Amidst ardent social reforms to empower each person, 19th and 20th century Rochester business boomed, making it The City of Many Industries (McKelvey, 1979, p 83). These are some of its start-ups that took hold:

Rochester’s politics and press celebrated these ventures which fueled the economy and supported lifestyles. Rochester the boomtown thrived on innovation and free thinking, until big business began to exert its influence.

At the turn of the 20th century, Rochester leaders conducted a crackdown on crime, gambling, and gang activity. The Democratic editor of the Herald directed the young editorial cartoonist JS Clubb to sketch wealthy gentlemen around a Faro table (a poker-like gambling card game), suggesting that amidst the crackdown, Rochester’s Mayor Carnahan was neglecting serious crime among the privileged class. After Clubb’s cartoon ran on Christmas morning 1900, police raided a downtown club to reveal a widespread organized gambling ring for exclusive clientele that been long protected from anti-gambling drives. Although the Mayor was exonerated, the scandal undermined his reelection in 1901 (McKelvey, p.102).

Rochester’s Republican Party leader was “Boss” George Washington Aldridge II (1856-1922). After the Clubb cartoon compromised Aldridge’s pet Carnahan, Aldridge positioned another favorite to lead next. Aldridge was known as The Big Fellow, driving the party machine which dominated Rochester politics from the mid-1890s to his death in 1922. In a book about Rochester, Smugtown USA, feisty liberal journalist Curt Gerling (1902-1991) writes that “Aldridge set about changing Rochester from frequently Democratic to normally Republican.” (Gerling, p.152)

Aldridge sought office himself, campaigning for US Congress in 1910. Yet the media foiled him again when scandal broke with a cancelled check he had endorsed from an insurance company for favors. The local Democratic papers fanned the flames. After the election, the New York Times cover page boasted, “BOSS” ALDRIDGE DEFEATED.: Overthrow of the Odious Republican Ring in Rochester” (NYT Nov 7, 1895).

During most of their careers, editorial cartoonists John Scott Clubb and Elmer Messner worked for Gannett’s conservative Rochester newspapers.

Media mogul Frank Ernest Gannett (1876-1957) was a self-made man. A farmer’s son, he began as a paper boy for Democrat & Chronicle, before obtaining a scholarship to Cornell University, where he syndicated his own stories to various school and regional publications.

Ambitious and controlling, he started small and kept building, merging small papers across upstate New York and forming larger ones.

In 1918, Gannett came to Rochester and helped Aldridge to turn the political tide, buying The Union and Advertiser and the Times and merging them to form the Times-Union, a daily evening newspaper which monopolized Rochester from 1918 to 1997. Gannett fended off liberal rival William Randolph Hearst by expanding his own empire east to Albany.

In 1928, Gannett purchased the Rochester Democrat and Chronicle (D&C), where he had first worked as a paperboy. Rochester native and journalist Henry W. Clune (1890-1995) joined the D&C in 1910, when there were four other English-speaking papers competing for with “athletic intensity” (Clune, p.241). Under Gannett’s consolidation, competitors were either bought out or beat out until there were only two local dailies, both under his control. Gannett eschewed sensationalism, elevating politics over crime stories. He sent his opinions to his editors, “For your information and use, if desired.”

Controlling and hugely ambitious, Gannett was active in conservative state and national politics. Gannett solidified Rochester as Republican territory through his papers’ endorsements of Republican politicians, and Rochester became the most Republican of New York State cities.

While New York and the US embraced progressive social programs, Frank Gannett kept Rochester marching to a conservative drum. His ambitions eclipsed newspapers; in 1936, Gannett unsuccessfully sought the Republican nomination for governor, and in 1940 he tried for the Republican nomination for US President, disillusioned with Franklin Roosevelt’s war on “sons of privilege” (Gerling, Smugtown p.162).

Undeterred by these losses, in 1942 Gannett served as Assistant Chairman to the Republican National Committee.