The Transformative Power of Paychex 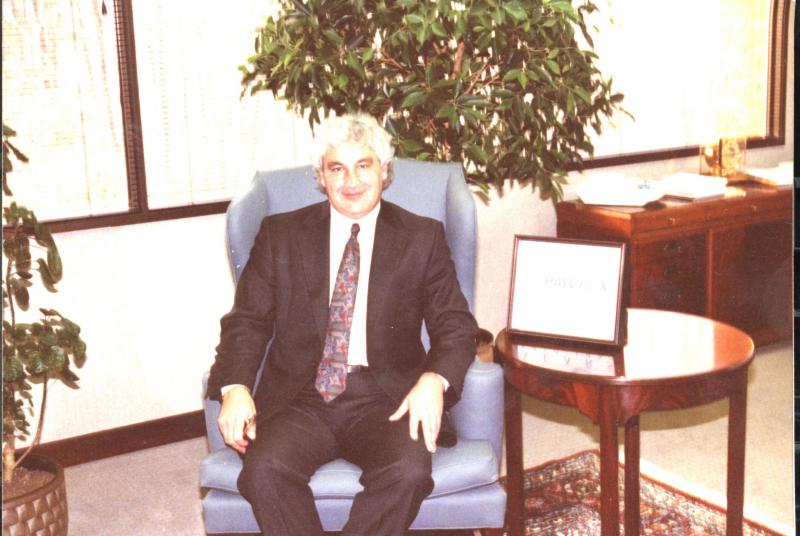 Graduating from Irondequoit High School in 1962, Golisano then attended Alfred State University where he received his degree in General Business Management.

As a young father seeking to support his family, Tom Golisano began his very first small business, a publication called Bidder’s Guide. Having noticed a disparity in the way that local organizations advertised the availability of bids for public contracts, Golisano realized the strategic value of compiling all available bids so that each competing company could see, sort, and format bids according to customer needs. Golisano then sold his publication as a subscription to companies hoping to maximize their product’s potential.

Although Bidder’s Guide was not a lifelong venture, Tom Golisano had already proved his affinity for recognizing holes in a given market, and producing an innovative solution. Having sold Bidder’s Guide a few years following its inception, Tom Golisano was ready to fill yet another gap he had spotted in an already familiar market.

Golisano went on to work for Electronic Accounting Systems (EAS) where he observed that the company served large businesses-leaving small businesses to complete their own payroll services. Upon approaching his superiors with this intriguing opportunity, Tom Golisano was turned away, as the current business model was deemed more preferable. Remaining determined with his new idea, Golisano left his employer, and introduced the Rochester region to PayMaster in 1971, with the original office on Rochester's Alexander Street. 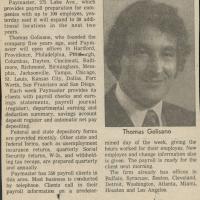 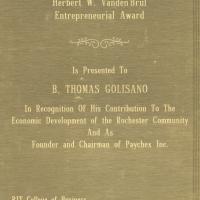 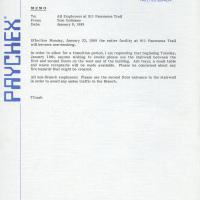 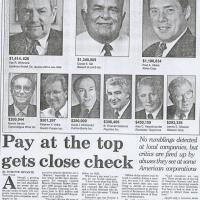 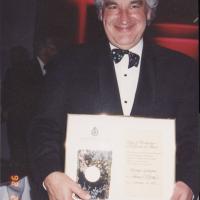 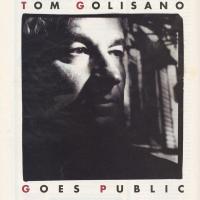 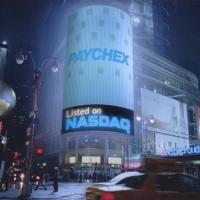 Photo #1- A newspaper article from May of 1976 describing the expansion of PayMaster, as the company moved to open twenty additional offices. Expanding from the Rochester area, new offices would be opened in "Hartford, Providence, Philadelphia, Pittsburgh, etc..."

Photo #2- The Herbert W. VandenBrul Entrepeneurial Award given to Tom Golisano in 1987 by the Rochester Institue of Technology's College of Business, for his "contribution to the economic development of the Rochester Community and as Founder and Chairman of Paychex, inc." This was before the college was renamed the Saunders College of Business, and after PayMaster was renamed Paychex, Inc.

Photo #3- A Paychex office memo sent by Tom Golisano on January 9, 1989, informing employees that as of January 23, 1989, the facility would become "non-smoking." While smoking on company grounds was very common across the country, Golisano was proactive in eliminating the practice.

Photo #4- A newspaper article featuring photographs of well-known CEO's in the Rochester area, and their associated yearly incomes at the time. Tom Golisano is shown on the bottom row, as he rose to increasing prominence alongside the CEO's of Rochester companies, such as Eastman Kodak, Bausch & Lomb, and Xerox Corp.

Photo #5- Tom Golisano, pictured holding the City of Rochester Certificate of Merit on February 15, 1992. As Paychex was becoming more prominent in the area, Golisano represented a positive shift in the economy of Rochester, NY.

Photo #6- Cover of "Second Acts," featuring Tom Golisano as he prepared to take Paychex public, after reacquiring the disparate franchises across the country.

Photo #7- The Nasdaq sign in Times Square, as it displayed the Paychex logo. This sign in such a highly populated and popular area reinforced the momentous nature of the company's direction for the future. 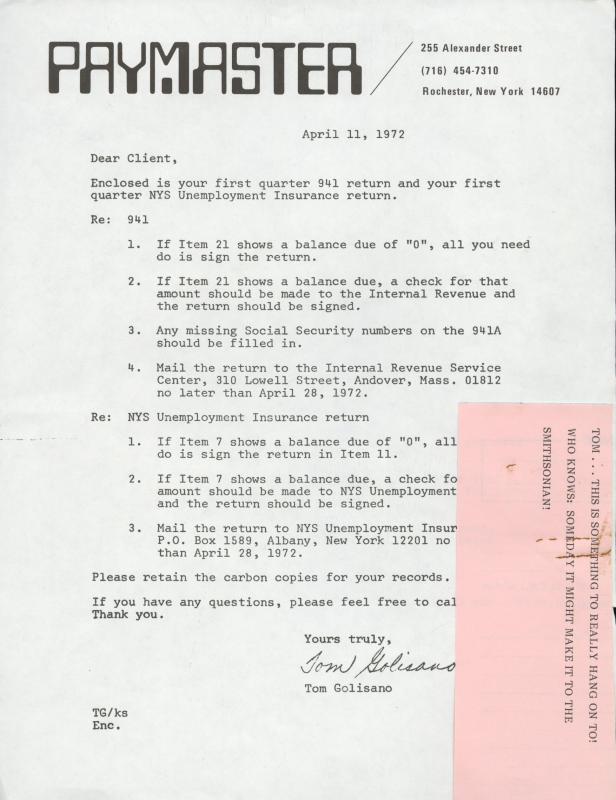 Working from an office he rented from EAS, Tom Golisano crafted a franchised company through which small businesses could easily report their employees' hours and wages, all for a lower price than the competitors. This provided small business owners, who up until now had to do this on their own, a streamlined and affordable option.

In 1979, as PayMaster grew, Golisano made the sweeping decision to merge the disparate company of 19 franchises- and incorporate them under the new name of Paychex, Inc. In doing so, Golisano became President and CEO (1971-2004) of a company that would provide high quality payroll services, human resources, and benefit outsourcing solutions, to the many small business-based customers he had amassed. In altering the configuration of his business, and allowing himself greater oversight, Tom Golisano laid the foundation for many more moments of innovation.

Moving into the Future 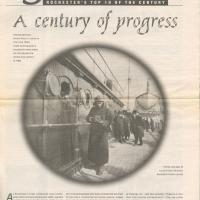 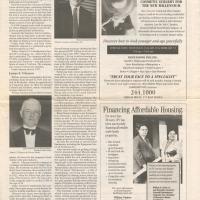 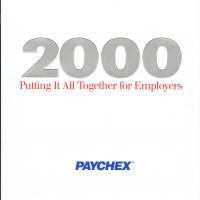 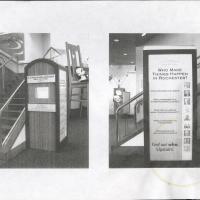 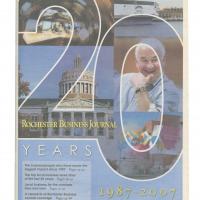 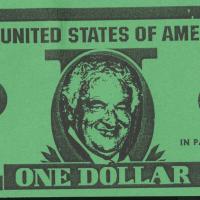 Photo #8- The cover of Rochester Business Journal's "A Century of Progress" issue, published on December 31, 1999. Featuring a picture of George Eastman in the 1890's, this special edition paper sought to represent the area's biggest innovators of the twentieth-century.

Photo #9- Inside the Rochester Business Journal's "A Century of Progress" issue, featuring the accomplishments of Tom Golisano. With a history of Golisano's earliest jobs, his entrepreneurial beginnings are spotlighted.

Photo #10- The cover of Paychex, Inc.'s Annual Report from 2000. For those flipping through the pages, they will see a central article describing the benefits of using the emerging powers of personal Internet usage. As 2000 signaled a year of change for many, Tom Golisano was anticipating the transformative properties of the Internet- much earlier than others.

Photo #11- A photograph of the Rochester Museum and Science Center's exhibition relating to the Rochester Business Hall of Fame. Tom Golisano was inducted in 2001, alongside other community members including, Robert Wegman, Austin Steward, Kate Gleason, and many others.

Photo #12- The 2007 Commemorative Issue of the Rochester Business Journal, celebrating the publication's 20th anniversary. As a prominent figure in Rochester Business, Tom Golisano contributed to many of their features and articles.

Photo #13- A fake one-dollar bill, depicting Tom Golisano's face in the center, accompanied by the words, "In Paychex We Trust." Tom Golisano is well-known for the strength of the relationships he maintains within his company.